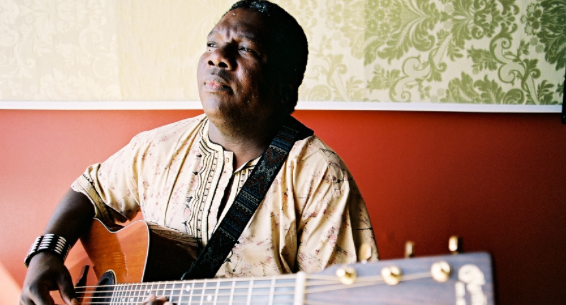 Vusi grew up in the Mamelodi township, just outside of Pretoria, South Africa, where he still resides.  As Vusi tells it, he grew up a happy kid and was blind to the injustices in his country.  His grandmother operated a Shebeen behind their home.  Due to the cultural boycott inflicted by Apartheid, black South African music was hard to come by and was banned from being played on the radio.  So, they played American records in the pub.  James Brown.  Motown.  The Commodores. And whatever South African and African recordings they could find: Mahotella Queens, Mahlatini Queens, Miriam Makeba, Dark City Sisters, Fela Kuti.  Young Vusi and his neighborhood friends formed a little band of their own and started making music of their own, inspired by the recordings they heard wafting out of the Shebeen.  Vusi built his first guitar from fishing line and a cooking oil can and taught himself how to play.   In 1976, Vusi’s political education began as he witnessed the devastating massacre of more than 200 black South Africans in the Soweto Uprising.  Vusi responded through his music, inspiring other musicians and listeners around him.

Vusi was humbled this spring to receive an honorary doctorate degree from the prestigious Rhodes University in Grahamstown, SA; a couple of weeks later on Freedom Day, South Africa’s President Jacob Zuma awarded Vusi with the National Order of Ikhamanga recognizing him for “drawing attention to the injustices that isolated South Africa from the global community during the Apartheid years.”

This past year, the SAMA Awards (South African Music Awards) chose to honor Vusi with a Lifetime Achievement award to recognize his accomplishments both at home and abroad. The honor made the troubadour take a look back and realize that in what felt like a blink of the eye, it had been twenty years since the release of When You Come Back. In celebration, he got the band together and put on a big show at the Lyric Theatre in Johannesburg—and recorded it.

The result is Sing to the People, a live recording including songs from throughout the first twenty years of his career, out now on ATO Records. The album contains joyful performances and the visceral sounds of an audience that’s hanging on every single note and already knows every single lyric by heart. It’s toe-tapping and heart-thumping. It’s Vusi singing to the people.