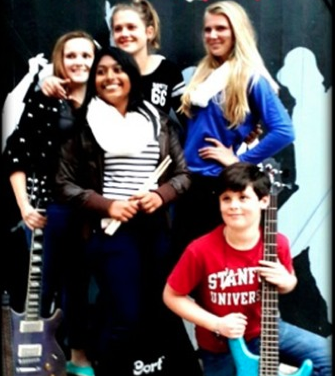 7 Day Weekend, with their vocalist’s distinctive voice, falls across genres where although they lean towards an Indie sound, they perform a chilled version of popular rock songs.

The almost girl band, apart from bassist Dylan, are all scholars at Uplands College. Band Coach Aggi de Agiuar has been rehearsing them since February 2014, and they are an incredibly committed bunch, especially when their ages are taken into account.

These talented youngsters can do a 40 minute set in their stride.

Repertoire includes: CLOCKS by Coldplay; COUNTING STARS by One Republic; TEENAGE DREAM by Katie Perry; CRAZY by Gnarls Barkley; STOP and STARE by One Republic; LOSING MY FAVOURITE GAME by Cardigans; HOLD ON by Clobie Cal- lais; SUNRISE an original written by Skye Clarke

Ever since Skye was young, from dawn to dusk she was singing. This grew from family concerts in the lounge to performing in talent shows to per- forming at the academy. She has always enjoyed jazz and a range of other genres of music. She loves 7 Day Weekend because it helps her to grow mu- sically and gives her lots of new experiences.

Tamzyn has always loved the idea of playing an instrument. She started playing the violin aged 7, which led her to piano then to key- board. She enjoys listening to all kinds of music, but mostly Rock and Indie. There is a lot that she loves about being a member of 7 Day Weekend, particularly the new opportunities they get and the unity they have built by being in the band together.

Chantal first started playing guitar in grade 5 after having seen a friend play, and wanting to try it too. After a few lessons, she was hooked. When she went to Uplands, she feels lucky to have found Aggi who took her under his wing and is now busy teaching her the tricks of the music trade. She likes modern pop and rock genres and loves jamming in the band with her friends. “It is great that we have CMDA to help us pursue our music passion!”

Marisa got into music when in primary school where they were taught music in class and specifically when they were taught how to play the drums. She enjoyed it and her passion grew from there. The music genres she enjoys are rap and rock. What she enjoys most about be- ing in the band is the bonding time she has with the band members.

“I mean we are there practicing all the time so it would be hard not to bond.”

Dylan always wanted to play drums and started as soon as he had the opportunity. When he was introduced to CMDA Band Coach Aggi de Agiuar, he switched over to bass guitar. His favourite genre of music is rock and in his free time he loves mixing with his friends and riding his motor bike.